Novo Mesto, Slovenia – Team Novo Nordisk concluded their maiden Tour of Slovenia on a high note with Frenchman Charles Planet showing the Changing Diabetes colors up front in a splendid breakaway under inclement weather. David Lozano successfully defended his 18th spot in the overall classification and the world’s first all diabetes professional cycling team rode into Novo Mesto in 9th position in the team’s classification with a full roster.

The final stage of the Tour of Slovenia started in Trebnje and the peloton had to negotiate two Cat-3 climbs over a 167.5km-long route, the last of which, a 8.6 km ascent with an average gradient of 4.5%, coming just 30km from the finish line in Novo Mesto.

Team Novo Nordisk was very active right from the gun and Joonas Henttala was in the first move that broke clear. However, due to a diligent pace setting by Michelton-Scott the initial 11-man breakaway was eventually reeled in. At the 15 km mark three other riders forged ahead and got a gap and showing his true fighting spirit our Frenchman Charles Planet bridged across solo and the day’s breakaway was settled.

As the rain poured down relentlessly Marengo called it a day as the front group reached the 50 km mark and the breakaway was down to three riders who, nevertheless, continued to cooperate and stayed away until the approach to the final climb when the Gazprom led peloton swallowed up the escapees.

Despite the furious pace another group of riders managed to break clear but ultimately the main field came back together and began to naturally thin out on the last ascent. Team Novo Nordisk just missed out on a split and despite the best efforts from his teammates our designated sprinter for the day, Italian Andrea Peron, was unable to bridge back to the front group.

Spaniard David Lozano finished safely in a second chase group alongside Andrea Peron, two minutes and 23 seconds after the winner, and defended his 18th place in the overall classification.

“There were a lot of attacks at the beginning. Initially 11 riders went away, it was a really dangerous breakaway so Michelton – Scott put some guys in the front of the peloton and the pace was incredible. I was on my limit but I managed to stay with the main field as knew that for sure once they caught them the right break would go. My plan went to perfection. I suffered a lot and went into the red zone for a long time in the first hour but it was nice to spend the day in the breakaway. We were caught 5 km before the last climb. My day was done and I was happy so I just enjoyed the rest of the stage.”

“It was our first time racing in the Tour of Slovenia and it was an amazing race. We had a fantastic welcome from the Slovenian Diabetes Association which gave an amazing visibility to our team. We saw so many people who were inspired by Team Novo Nordisk and we are touched to have so many new fans in this country. We finished with an 18th place in the General Classification and considering it’s an HC race, and a very challenging one, its a solid result. We also achieved ninth place in the teams classification which is motivating when there were 19 teams at the start. We raced aggressively and featured in breakaways twice so I consider this was a pretty successful race for our team. We are already looking forward to coming back in 2020!” 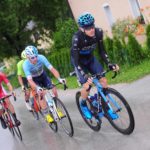 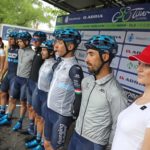