MILTON, CANADA – Straight after my World Cup in Hong Kong, I’ve been training in LA the last seven weeks leading into this World Cup.

I qualified ninth in the 200 meter sprint qualification where the top 10 riders make it to the 1/16th round. In the 1/8th round, I raced Columbian, Marta Bayona. We qualified around the same time and I knew it was going to be a challenging ride, but I won that ride and qualified for the quarterfinals. While the first two rounds are only one ride in which the winner goes through directly, quarterfinals, semi-finals and finals are all best of three. In the quarterfinals, I raced Canadian, Kelsey Mitchell, current world record holder in the 200m. I won the first ride, she won the second one, so we had to race for a decider.

It was a tough day at the “Oval Office” and I finished sixth overall. I didn’t qualify as highly as I would have liked, but that’s racing. Overall, I’m happy: my teammate won the bronze and we earned good points. We are a team here and it’s important that we both do well since both of our points count towards the overall Olympic Sprint Ranking for our nation. An Olympic year is tough, but this has been one of my best World Cup seasons: I finished ninth out of 60 riders in the overall World Cup Sprint Ranking and made it in the top 10 at three out of the four World Cups I competed in (fourth – Minsk, 13th – Glasgow, 10th – Hong Kong, sixth – Milton).

It’s been a tough training and race block, but also a great week with the team, seeing their success and having the support of USAC there for all of us! Now I’m looking forward to the final preparations for the World Championships in Berlin where I’ll be racing the Sprints on Thursday, Feb 27. This will be the final push for Tokyo and USA Cycling will announce their Olympic Long Team shortly after. Stay tuned! 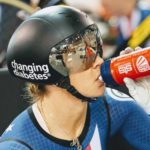