Sumayit, Azerbaidjan –  The 2016 Tour d’Azerbaïdjan kicked off with an early breakaway by Mohd Zamri Salleh (Terengganu Cycling Team). Salleh rode solo for the first 70km, eventually gaining a maximum advantage of 8:35, but as the race approached Sumgayit, and its final five circuits, the Malaysian rider was caught and a new breakaway, featuring Elchin Asadov (Synergy Baku Cycling Project), Nurbolat Kulimbetov (Astana City), Alexander Evtushenko (Gazprom-Rusvelo) and Andreas Keuser (Kuwait Cycling Project) pulled out in front. The Team Novo Nordisk squad attempted to put a man into the second break, but was unable.

“Today’s stage got off to a strange start,” Team Novo Nordisk rider Chris Williams (AUS) said. “The wind was blowing as usual, and everyone was expecting the race to be blown apart- but no one was willing to ride hard. So when one rider went off the front, the bunch was happy to let him go. And as we entered the circuits as a big group, it was very nervous and jittery.”

Shortly after the final intermediate sprint, the breakaway was reeled in and several teams went on the attack, though none were able to break free. Bora – Argon 18 controlled the final sprint and pushed their rider Phil Bauhaus across the finish for the win. David Lozano finished best for Team Novo Nordisk at 41st, coming in at the same time as Bauhaus. 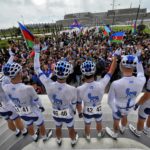 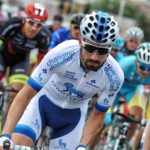