BAKU, AZ — Romain Gioux finished 13th out of an elite field on Sunday in the fifth and final stage at the Tour d’Azerbaijan. The French rider in his first professional season survived a hard day on the cobblestones and hills of the historic old town of Baku to score his second Top-15 finish of the year.

Sunday’s fifth stage began on the shores of the Caspian Sea, with the peloton stretching out and away from the city center before returning to take five tough laps through Azerbaijan’s capital city.

An early breakaway of five riders fell apart inside Baku, and quickly refilled itself with multiple attacks off the front. Krists Nielands of Latvia broke away solo in the final lap to win the race by 21 seconds.

Gioux and his teammates Brian Kamstra, Umberto Poli and Stephen Clancy all rode in the front group over the 13km circuit, with a 2k climb and more than 1.5km of narrow, twisting and cobblestone alleyways.

Behind the winner a field of 50 riders, less than half the remaining peloton, chased for the field sprint. Turkey’s Ahmet Orken won the group for second on the day, with Saturday’s Queen Stage mountain winner Edwin Avila of Colombia in third.

Gioux moved up 30 places on the final General Classification with his sprint result, and will now pack his suitcase and fly to Sacramento to recover and prepare for next week’s Tour of California.

“Sunday was our strongest stage, with the goal of being at the front and in position when the race entered the circuits in Baku. The guys did just that, and it paid off. Unfortunately Brian flatted on the second-to-last lap, otherwise he would have been in the first group with Romain for the finish.”

“This kind of 2k climb is perfect for me. But before the climb was the cobbles, and I don’t like cobbles because I am too small. But I had good legs today, so I passed the cobbles each time with no trouble. Now after dinner tonight I go to bed and get up very early for 17 hours on the planes – plus jetlag. But it’s a pleasure for me to go there because I am really looking forward to the Tour of California.” 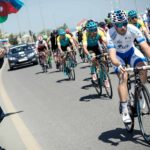