Ismayilli, Azerbaidjan – Stage two of the 2016 Tour d’Azerbaïdjan featured what might be the toughest profile of the five-day race, with three major climbs throughout the 186.5-km route. “Today’s stage was tough,” said Team Novo Nordisk Sport Director Massimo Podenza. “It was very fast, with a difficult course and lots of crosswind.”

Attacks began from the start, and Team Novo Nordisk was eager to get a rider into the breakaway. But when a group of nine riders finally got clear at 30km with no Team Novo Nordisk present, the squad shifted its strategy to support David Lozano (ESP) for the stage’s final sprint.

“I’m actually not a good rider on the windy stages,” Lozano said, “but my form is growing and I felt good today. So I stayed among the front group for most of the stage. But unfortunately the group was split after the last climb, and I lost contact.”

“I feel that I did well,” Lozano went to say. “But I can still do it better, so I’ll try to be in better position next time. The stage was harder than what I expected but no complaints. Every time the road goes up, the wind is not a decisive factor! Tomorrow I’ll fight more and hope to do better!” 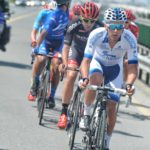