Asan, Korea — Team Novo Nordisk’s Charles Planet made a bold late race move on Stage 5 of the Tour de Korea that earned him his best result of the 2016 season.

Thursday’s 170.7-kilometer race featured one categorized climb and some lumpy sections, including a 1-km climb situated two kilometers from the finish in Asan. A six-man break escaped but with 50 km remaining, Karol Domagalski (One Pro Cycling) attacked this front group and set off solo. The move paid off and the Polish rider held on to take the win. Back in the peloton, Team Novo Nordisk’s David Lozano led Planet to the front heading up the final climb and the Frenchman attacked. Several other riders got a few seconds ahead of Planet and the Frenchman couldn’t close the gap. He finished in 10th place.

“This was absolutely the perfect finish for me. At the final one-kilometer climb, David put me in the front but I was not on the right side of the road to attack. I waited a little bit too long before I went and this cost me and allowed the few guys to get ahead,” Planet said. “I attacked from far behind and unfortunately I was alone between these riders off the front and the peloton. I kept riding full gas till the finish. I was so close to getting that major result. The team is racing really well and we have three more chances.”

Team Novo Nordisk continues racing on Thursday with Stage 1 of the Grand Prix Cycliste de Saguenay in Canada. On Friday, the team resumes racing at the Tour de Korea with Stage 6. The 194.6-km race begins in Asan and features two categorized climbs before a downhill finish into Chungju. 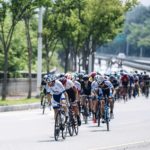