Friday’s 194.6-kilometer race served as the race’s Queen Stage, or hardest stage. It featured two categorized climbs and few flat places on the run to Chungju. Thirty kilometers into the day and heading up the first climb, Megias and nine other riders attacked. The large group worked well together and arrived at the line as a seven-man group. Zhandos Bizhigitov (Vino 4ever SKO) sprinted to the win with Megias taking fifth. Grega Bole (Nippo-Vini Fantini) moved into the overall race lead with Megias 13 seconds behind.

“Today’s plan was to be in the breakaway because that was the only chance I had to improve in the overall classification,” Megias said. “I was fifth coming into the sprint. I know I could have been better, but I also know it could have been worse. At least I am second overall and now we work to defend my position over the next two days. This race is hard; the attacks never stop.”

Team Novo Nordisk continues racing on Friday with Stage 2 of the Grand Prix Cycliste de Saguenay in Canada. On Saturday, the team resumes racing at the Tour de Korea with Stage 7. The 142.8-km penultimate stage begins in Chungju and is relatively flat before finishing in Seoul. 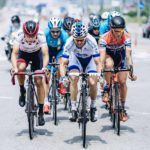 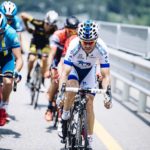