HENGQIN, CHINA – Lessons learned over two weeks of aggressive Asia Tour stage racing came out on Sundy and demonstrated their pupils’ progress, with Team Novo Nordisk rider Mehdi Benhamouda sprinting to a top 10 finish after a day of successful teamwork to put him there.

The peloton had spent Saturday in transfer over one thousand kilometers by high-speed train to arrive for Sunday’s final stage in Zhuhai Hengqin.

Confidence, experience and fitness all came together at the southwestern end of China’s massive Guangjou-Shenzhen megapolis, on the flat, relentless parcours and under the casinos and resorts of Macau with the bright lights of Hong Kong across the Zhuijiang River estuary. 44 million people live in the surrounding urban agglomeration, but the race was on closed roads and over an island in redevelopment for a sports and recreation project away from the city center.

Teamwork for a sprinter has been the active lesson over two weeks on both sides of the Tour of China. On Sunday Benhamouda held back for his chance behind the right wheels at the right time, and used the speed and strength of his teammates to finish 9th on the final day of racing. It is Benhamouda’s second top 10 of the 2017 season.

“Flat and windy today and also a bit wet. The short roads meant no advantage in the headwind or the tailwind, so you recovered too quick. I got into the breakaway for a bit, then Clancy and Gerd started pulling for Quentin and Mehdi in the finish. Mehdi was in a really good position at the last 500m, and then there was a split and Mehdi was in front of it. A really good result.”

“Two weeks at this level racing, 7200km of travel in Tour of China I and II. The fantastic staff made this a lot easier, and thanks are due to them. The team lead out is improving in a good way, and this is the best racing of the season for our guys.” 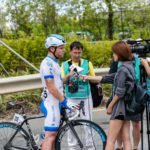