YEONGJU, KOREA – The third stage on the 2017 Tour de Korea began on Friday at the Taekwondon National Taekwondo Center and the fight for the breakaway began immediately after the start. As in stage two, teams chose to control the peloton for the first hour, allowing no escapees until the first climb of the day.

Charles Planet spent that hour attacking in search of a day off the front, but in the end six riders from rival squads spent the stage dangling 90 seconds ahead of the main peloton.

At 10km to go the race was all together and headed for a mass sprint. Mehdi Benhamouda, Chris Williams and David Lozano worked to put sprinter Andrea Peron in a good position for the flat finish.

A crash with less than 3km to go interrupted the race briefly, and it was New Zealander Scott Sunderland who won the stage ahead of countryman Brenton Jones and Korean rider Joon Yong Seo. Local rider Kyeongho Min held on to his yellow leader’s jersey for a second stage, with Team Novo Nordisk’s Benhamouda finishing as the second best young rider on the day.

“Just constant attacking and following, for the first hour. I think we covered 50k again in the first hour, and the breakaway did not go until the first KOM. It has been really fast the last few days, and we missed the breakaway again, so we’re motivated for tomorrow. It’s pretty crazy racing in Asia, the stages aren’t that hilly and there’s almost always a bunch finish.”

“The pace was high again today, higher still than yesterday. 50, sometimes 60k an hour and always a bloc. Charles was very active many times at the front to try for the breakaway, but no luck today. In the finish there were some crashes but our guys escaped and finished on their bikes. Mehdi and Andrea worked for the sprint and it was a good result. Tomorrow is a better chance for the breakaway to arrive at the finish first, so we will try to be there.” 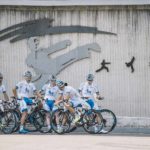