Henttala Flies to the Finish at Tour de Pologne

KATOWICE, POLAND – Joonas Henttala attacked at the start of the Tour de Pologne’s second stage on Sunday, riding clear to a three-minute advantage with three other riders before a baffling tactical move set the breakaway on a course for collapse.

Under sunny skies and in front of tens of thousands of roadside fans, stage two began with a short parade lap and then a longer circuit through and around Tarnowskie Gory. A Dutch rider leading the Mountain Points classification and two Polish riders from two different teams joined Henttala for the breakaway.

With more than 50km to the finish, one Polish rider attacked the breakaway solo and quickly took nearly a minute on Henttala and the other two. With no more Mountain Points on offer for the Dutch rider, and a fellow countryman up the road for the Polish rider, Henttala found himself the only athlete at the front with any reason to chase.

Henttala went solo in pursuit of the leader, and chased for nearly 20 minutes, but the entire peloton caught all of the breakaway riders, including the Polish national team rider alone off the front.

On a three-lap circuit in Katowice the sprinters’ teams took over, with Italian Sacha Modolo finishing ahead of Danny Van Poppel of the Netherlands and Max Warscheid of Germany in a group sprint. Van Poppel takes over the leader’s yellow jersey ahead of stage three.

“I made the first move at the start, and two Polish guys and one Dutch guy followed me. We worked well the first hour or so, but then one of the Polish guys attacked before the first sprint, and after that the other Polish guy didn’t want to work any more, so it was just me and the Dutch guy. From then on you could tell the breakaway was done.”

“Joonas was very strong today and we achieved our goal to get in the breakaway. It’s too bad the breakaway fell apart so early, but nonetheless we did good and we have some more motivation to succeed in the next stages.” 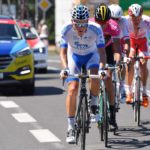 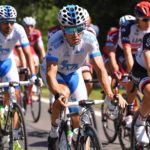 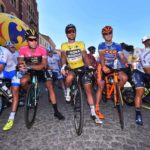