Lozano and Megias Climb With the Leaders at Tour de Pologne

SZCZYRK, POLAND – David Lozano found himself at the front of the bike race on Monday as stage three of the Tour de Pologne stretched across a hot and sunny southern Poland on the last day of July.

Tens of thousands of flag-waving fans lined the roads for a unusually late start, cheering as the peloton left Jaworno, pronounced Ya-vozhno, at 3pm, with temperatures around 32C/90F. A breakaway of seven riders formed after nearly 20 minutes of hectic and combative attacks, but Team Novo Nordisk missed the move and quickly began to shuttle back with dozens of other riders to the following team cars to retrieve water, ice and food for the hard road ahead.

After two hours of racing the peloton entered the Beskid Mountains, a forested tourist resort area where the Polish President’s summer residence is located. Again, thousands of fans lined the surrounding roads to watch the riders climb past the government properties and down back into the village for three circuits and a finish in Szczyrk (pronounced Sh-cherk).

In the end Lozano and teammate Javier Megias rode themselves into the quickly shrinking group of around 50 elite climbers at the front, who caught and passed the breakaway before attacking each other on the final climb and over the last 10km downhill to the finish.

Dutch rider Dylan Teuns won ahead of nearby Slovakia’s Peter Sagan, who moves back into the leader’s yellow jersey for Tuesday’s 238km stage four.

“We wanted to be in the best position possible all day, and save as much of Javi’s energy as we could. On the last climb Katusha started pulling really, really hard, and we did the best we could to stay with them. There’s still four stages left, and I prefer to race in the heat like this over the cold and wet.”

“Today was a day for the General Classification, and tomorrow is a very long stage. Our guys missed the breakaway today but tomorrow will be another chance. It’s important to drink and eat on days like this and to recover as much as possible in between the stages.” 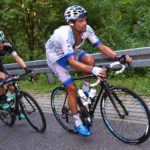