RZESZOW, POLAND – Andrea Peron slipped in the rain with 30km to go on Wednesday, crashing into a short traffic barrier at more than 40km per hour on stage five of the Tour de Pologne.

Peron escaped with only minor injuries, and is clear to start Thursday’s stage six, but the heavy rain that fell near the end of the shortest stage of the 2017 Tour de Pologne sent many riders in the peloton into far worse crashes than the Team Novo Nordisk rider as the summer roads turned slippery.

Six riders jumped into a breakaway almost immediately after a hot and sunny start from the front gates of an expansive and modern Polish business headquarters at Olimp Nagawczyna (pronounced Na-gaf-she-na). Chasing teams gave little freedom to the escapees, who never went much further than 2:30 ahead of the peloton on the constantly rolling course.

The hot, muggy weather broke around 30km to the finish in Rzeszow, pronounced Zhesh-ov, as the peloton sped up to catch the breakaway on the finishing circuits across the Wislok river.

Peron slipped on a slight downhill curve and injured his right hand, which team medical staff treated immediately following the race. The peloton caught the break but minutes later most of the chasers were held up in a series of crashes at the finish, as Dutch rider Danny Van Poppel sprinted ahead of Slovenian Luka Mezgec to take the stage win. Overall race leader Peter Sagan held onto his yellow jersey with third on Wednesday’s podium.

“The temperature at the beginning was really hot, I think 36ºC/97ºF. The problem is you can’t breathe easy because there was no wind and nothing moving. At about 30k to the finish it started raining, which was actually good because at least we could breathe again.”

“When it hasn’t rained in a long time, the first heavy rain always loosens the oils and dirt that are on the asphalt. Andrea slipped but he didn’t fall, and he’s ok to start tomorrow.” 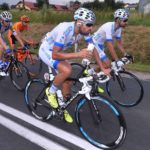 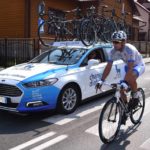