Lozano Helps Power Breakaway on Stage 3 of Tour of California

MORRO BAY, CALIFORNIA — Stage 3 of the Tour of California served as the longest day of the six-day American stage race, and Team Novo Nordisk’s David Lozano was determined to leave his mark. Following the neutral start, Ben Wolfe (Jelly Belly presented by Maxxis) attacked, and Lozano was the first to grab his wheel.

Three additional riders followed the move rounding out the breakaway to five. The escapees worked well together and quickly built a gap of more than five minutes despite strong winds.

On 192.5-kilometer stage, Lozano was third through the first intermediate sprint and heading up the day’s only categorized climb, he attacked and took top honors. He held his gap and soloed down the descent before being reabsorbed by the breakaway. Through the second intermediate sprint, the 28-year-old Spaniard grabbed third again.

As the race approached the finish in the coastal town of Morro Bay, Wolfe attacked the break and set off solo. He was eventually reeled in before a technical finish with Peter Sagan (Bora-Hansgrohe) taking the win.

“We knew we had to get into the break and David did it. For our team, being off the front and showing our jersey is one of our top priorities. It got very narrow in the final 40 kilometers, and our riders organized well around Martijn with 10 kilometers to go. The World Champion won today so you can see how technical and challenging this finish was. Tomorrow’s plan is the same: breakaway.”

“We missed the break yesterday, so today’s first goal was to be in the break. When my group went, immediately we worked really well together and the peloton let us go. With 500 meters to go to the summit of the KOM, I attacked so I could get the points and then I took the downhill solo. They caught me at the bottom. If I can, I aim to get in the break again and get more points for the KOM jersey.”

The world’s first all-diabetes pro cycling team continues racing at the Tour of California on Wednesday with Stage 4. The 99.1 mile (159.5 kilometers) stage begins in Santa Barbara and features four categorized climbs and two intermediate sprints before a long uphill drag into Santa Clarita. 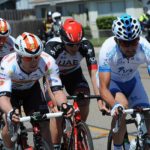 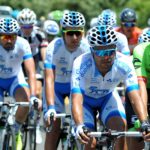