Pasadena, California — On the final stage of the Tour of California, Team Novo Nordisk’s Joonas Henttala featured in an early breakaway on the extremely fast 124-kilometer race.

Saturday’s stage began from Mountain High Ski Resort with an early high-speed technical descent before several categorized climbs. Following a brief neutralization of the descent, Henttala and Jonny Clark (United Healthcare Pro Cycling) attacked off the front of the race. Initially, two riders bridged up but by the first intermediate sprint, Henttala’s group had grown to seven riders. Henttala was runner-up through the sprint but his group never earned a gap of more than 30 seconds. As the race started up the first categorized climb, Henttala’s group was caught and a new group emerged. This five-man breakaway built a gap of around a minute and held its gap as they reached the finishing circuit around downtown Pasadena. In the end, the breakaway foiled the chasing peloton with Evan Huffman (Rally Cycling) taking the win. A splintered peloton came in 22 seconds behind. George Bennett (Team Lotto NL-Jumbo) took the overall race win.

“Today was a bit of a gamble. We didn’t know if the break would be allowed to go or if the peloton would go full gas for the entire stage. It was a really fast downhill start, and it was dangerous so it ended up neutralized. When we reached the bottom, there were attacks and I chased and made the first one. We went full gas for the first half an hour. We thought the peloton would let us go after the intermediate sprint but the gap never went up. When we reached the base of the first climb, the leader’s attacked and that was the end for my group.”

Team Novo Nordisk returns to racing on May 26th with the two-day Tour of Estonia. 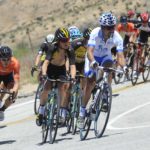