Rain and a Nervous Peloton at Tour of China Opener

Race: Tour of China I

WEICHANG, CHINA – Team Novo Nordisk returned in force to Asia this week for two consecutive stage races in central China. On Sunday 22 teams from around the world lined up under rainy skies for the first of five stages at the 2017 Tour of China I.

No suitable breakaway was able to ride fast enough to escape the peloton on Sunday, and the first 90 minutes of racing averaged more than 50km per hour. In driving rain the teams stayed together, with a group finally escaping after more than two hours of racing, creating a tiny time gap between themselves and the chasers that held until the finish.

Team Novo Nordisk’s Chris Williams and Stephen Clancy spent the early kilometers of Sunday’s race throwing themselves off the front of the peloton in search of a breakaway to no avail. Late flat tires for Williams and his teammates Gerd de Keijzer and Sam Brand challenged the squad near the end of the stage.

Italy’s Luca Pacioni won from the breakaway, with countryman Liam Bertazzo just behind. Siarhei Papok of Belarus finished third to complete the podium. Pacioni assumes race leadership, but Monday is a travel day, with Tuesday’s stage two starting more than 800km away in Xiyang for a hilly 197km stage to Yunzhuhu.

The Tour of China I will finish on 17 September, with the follow-up 5-stage Tour of China II set to run 19-24 September. Team Novo Nordisk will race both events with six diabetic riders from around the world, and also begin the Tour of Denmark with a separate squad.

“It was a wet and cold stage today, for the first 120km at least, and it was super fast. No one wanted to take control of the race, and everyone wanted to be in the breakaway. Eventually after 120km a small group was able to get away, with the peloton working hard to bring them back. All the guys finished in the bunch”

“With rain in the first 50k we started stage one at the Tour of China today. Williams and Clancy were very aggressive in a very fast start, and we averaged 52km per hour for the first 90 minutes. A group got away with about 10km to go and finished 10 seconds ahead of the bunch sprint. Tomorrow is an 813-km transfer day by bus.” 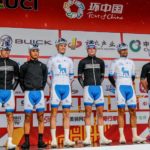 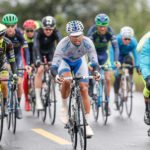