Benhamouda Sprints Into Anshun at Tour of China I Finale

Race: Tour of China I, stage 5

Anshun, CHINA – The 2017 Tour of China I concluded on Sunday in Anshun, with a fast sprinters’ racecourse along the Nanma river that flows through this Guizhou province city of 2.2 million people.

Hundreds of thousands turned out to see Team Novo Nordisk guide the peloton out from the shadow of China’s highest waterfall nearby at Huangguoshu and popular tourist attractions at the Long Gong Dragon Caves.

Riders from the world’s first all-diabetes professional cycling team improvised a sturdy solution to the crash of designated sprinter Quentin Valognes in the first half of the race, forming a sprint train ahead of Mehdi Benhamouda in the final kilometers on a warm late-summer day.

Both Benhamouda and Valognes finished in the same time as Italy’s Marco Benfatto, with Romania’s Eduard Grosso next and the Italian Mateo Malucelli in third. Liam Bertazzo of Italy won the overall classification.

“I crashed in the middle of the race and we took the decision to race for Mehdi because I no longer felt 100 per cent. With Mehdi we held with the leaders and into the top 20 in the last 200 meters, it was cool.”

“Hot today, 30ºC/86ºF and a lot of people. So many it’s unbelievable, at the closing ceremony it seems like the whole city came out to watch us walk through the central square.”

Team Novo Nordisk continues after two days in the Tour of China II through next week. 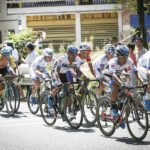 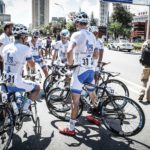