Tour of Estonia Teamwork Puts Peron at the Front

TARTU, ESTONIA— Strength in numbers for Team Novo Nordisk on Friday in the first stage at the Tour of Estonia, as Umberto Poli finds his dirt-riding skills come in handy to create a late-race breakaway for Andrea Peron and a Top-10 on a very hard day.

There was virtually no place in the tiny peloton of just 79 riders to hide for Team Novo Nordisk’s starting eight on the road out of Estonia’s charming Hanseatic capital Tallinn, and each breakaway attempt in the first hour was adequately covered by Reid McLure, Stephen Clancy, Gerd De Keijzer and Corentin Cherhal.

With Baltic winds angled across the smooth roads and cutting in and out of forests and fields, Quentin Valognes covered successive breakaways in the middle portion, passing through the mid-race feedzone at full speed within a strong group of almost 20 riders.

It was finally in the second dirt section when Poli shook loose the chasers and created a gap large enough to stay away, and together with teammate Peron and another 14 riders moved out to an advantage of more than two and a half minutes that lasted until the finish.

Karl Patrick Lauk of Estonia won the sprint to take stage one in Tartu. Deins Kanepejs of Latvia finished second, with Sweden’s Hampus Anderberg in third

“We’re lucky to have eight riders in the small peloton, and we were able to cover every move today at the start, and each breakaway had one of our guys in it. The race never slowed down and Umberto really kicked off an attack after the dirt section to separate himself and Andrea for the finish..”

“The conditions today were good, but always windy, and that opened gaps all day. The team is good, and we covered all the breakaways. Finally, in the second half of the race, after the feedzone, on the rough road section I got away with Andrea for the finish, and he got a good result.” 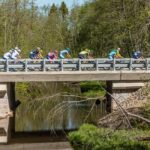 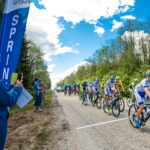