With spattering rain and warm winds blown from the South China Sea, riders still in the peloton for the final stage all expected to arrive together in a mass sprint but mostly did not, instead breaking up into several large groups throughout the day.

Half the peloton was already dropped and the other half scrambled to finish behind solo, breakaway stage winner Joseph Cooper, with the select leaders’ group chasing to catch the two-time New Zealand national road race champion exactly on the finish line. Joonas Henttala and Umberto Poli were among the handful of riders to catch Cooper.

This concludes Team Novo Nordisk’s 2017 season, but stay tuned for 2018 news, such as roster announcement and a first look at our new cycling kit, coming soon!

“Today was a tough 153km and maybe the windiest day of the week. Reid got into the first breakaway and they brought it back with about 40km to go and after that it was just attack, attack, attack all day.”

“Today’s stage was very fast, and the winner made a clever move to finish by just one second. Joonas and Umberto made the group that caught him, but it wasn’t enough.” 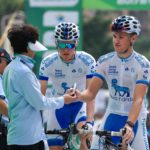