Sunny Shoreline Sprint at the Tour of Taihu Lake

CHANGXING, CHINA – Sunshine returned to the Tour of Taihu Lake on Friday after two days of rain as the peloton covered 134km with a fast finishing circuit in Changxing.

Team Novo Nordisk flexed its muscles all day on the flat and windy course, sending rider after rider into successive attacks throughout the stage, keeping the overall pace high by pushing at the front.

Stage three ended in a mass sprint near Huzhou, a city of 3 million on the southern shore of Lake Taihu, with repeat winner Jakub Mareczko of Italy first across the finish line, followed by countryman Nicolas Marini and France’s Benjamin Giraud. All six Team Novo Nordisk rider finished in the same time as the stage winner.

“It was flat and windy today, but no rain. All of the guys were really active in the race, and everybody kept attacking and trying to get into the breakaway. It’s important to stay at the front to avoid echelons.”

“Stage 3 was 134km, mostly along the shore of Lake Taihu. A slight crosswind kept the speeds high and resulted in a lot of breakaway attempts. The group stayed together and no break ever got more than 30 seconds. In the bunch sprint, there was a big crash at 4km to go. None of our riders crashed, but the guys were separated and lost their united lead out. There’s more work to do on the team lead out execution.” 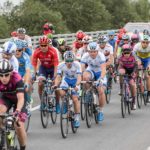 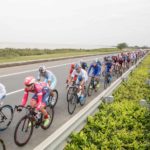