JIANGYAN, CHINA – Chris Williams jumped quickly and with specific intent into the escaping breakaway on Monday, and then rode the lightning-fast front of the bike race in stage six at the Tour of Taihu Lake.

Dry weather graced the peloton in China at the start, in Jiangyan, a city northwest of Shanghai, and skies held their precipitation throughout the day on the short and challenging stage. Williams joined a handful of riders out in front and held off the peloton until inside the final laps of the circuit.

Quentin Valognes worked as the last man for Romain Gioux, who finished 17th, his top result so far this week, and a clear progression day by day. Tuesday’s stage seven features hills and a challenging finish, and all eyes now turn to riders David Lozano and Charles Planet.

“Stage six was a bunch sprint like every other day, and we did a really great job in the finish. It was nervous, with a lot of crashes, but we were smart.”

“Chris went in the break with 5 guys after the first lap, and got a maximum gap of 90 seconds. Average speed was 49kp/h. Break was eliminated 2 laps to go. Bunch Sprint. Guys all worked for Romain again. Quentin was his last lead out guy. Very nervous finish with some crashes.” 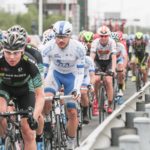 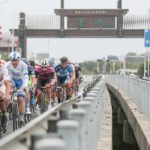 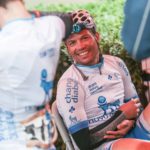