MAOSHAN, CHINA – The final day of the 2017 Tour of Taihu Lake put David Lozano at the front of the bike race for a hilly stage with a decisive finish at one of China’s sacred Daoist mountains.

Plenty of climbing on tap for Tuesday, with Team Novo Nordisk firmly supporting Charles Planet and David Lozano at the end of a flat week of racing. Planet crashed but remained uninjured on one of the many slippery descents through damp forest roads, but Lozano held on for the final selection to finish inside the top 20 the Queen Stage of the Tour of Taihu Lake.

“Today was the GC day, and we had three climbs to do. Our team was good, Charles was unlucky. The conditions were pretty dangerous with mud and road debris from rain earlier in the week. China was good, we had a good result today and now we look forward to seeing our friends in Japan.”

“The team was at the front in the best position and working for both guys on the high-speed narrow roads before the climbs, but after Charles crashed he was out of the first group his chances disappeared. He was ok, but the race was done for him.”

Team Novo Nordisk now moves across to Japan Cup for a pair of one-day races before finishing the 2017 season back in China at the Tour of Hainan. 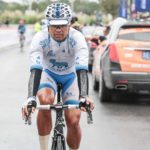