Logan, Utah — In Stage 1 of the Larry H. Miller Tour of Utah, Team Novo Nordisk’s Stephen Clancy earned the America First Credit Union’s fan favorite jersey. The general public voted on the jersey, which was based on the rider with the best ideals and professionalism in cycling, community or a charity.

“As a bike rider, we want to win races, but this team has an additional message to inspire, educate and empower everyone affected by diabetes. Today, we could see the strength of the diabetes community. Their support and votes that helped me win this jersey is very special and rewarding,” Clancy said. “I’ve ridden for five years in the same kit and tomorrow I’ll get to change it up for a day. I have a feeling it’ll be a day I’ll remember forever.”

When Clancy was diagnosed with type 1 diabetes at age 19, he was told extreme levels of exercise could complicate his diabetes management and make it more difficult to control the condition. Fortunately, he discovered Team Novo Nordisk within 24 hours of being discharged and was motivated to get back on the bike. In the five seasons he has raced for Team Novo Nordisk, Clancy has been a standout as a diabetes ambassador and frequently does public speaking events about his journey.

Monday’s opening stage of the Tour of Utah featured a 212-kilometer route that looped through Logan Canyon. Halfway up the day’s first categorized climb, three riders escaped off the front but many teams missed the move and a chase quickly formed.

The race reshuffled and a new 10-man break earned a gap that extended to 7:45. On the final categorized climb, the breakaway whittled down to five riders. On the long descent to Logan, they attacked one another and only Andrei Krasilnikau (Holowesko-Citadel p/b Hincapie Sportswear) and Miguel Angel Benito (Caja Rural-Seguros RGA) remained off the front. The duo was caught and the race entered the two downtown finishing laps all together. In the bunch sprint, Ty Magner (Holowesko-Citadel p/b Hincapie Sportswear) took the win by only a centimeter over Christopher Lawless (Axeon Hagens Berman Cycling Team). Team Novo Nordisk’s Fabio Calabria finished with the bunch sprint.

Team Novo Nordisk, the world’s first all-diabetes pro cycling team, is currently competing in two races: Tour de Pologne and Tour of Utah. Tuesday’s Stage 4 of the Tour de Pologne is a 238-km race from Zawiercie to Zabrze while Stage 2 of the Tour of Utah is a 151-km run from Brigham City to Snowbasin Resort and ends with a summit finish that could have an impact on the overall race classification. 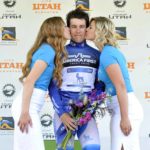 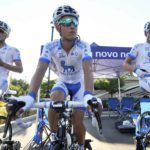