Stage 7 took place on a 10.8-kilometer course that circled the Utah state capitol. The peloton tackled 11 laps around the circuit, which included a punchy one-kilometer climb at the start/finish.

Attacks flew from the start with 17 riders forming an early breakaway. Their gap hovered around a minute for several laps. With six laps to go, several riders from the chase bridged up while a few riders dropped back to the main group. The newly formed group increased their pace, which started to splinter both the break and the chasing peloton.

The race regrouped several times and by the final lap, there was a four-man front group that included several of the day’s original escapees. Manuel Senni (BMC Racing Team) and Redi Halilaj (Amore & Vita) each laid down aggressive attacks but all the escapees were caught by the sprinter’s teams with 2 km to go.

It was a battle up the final climb, but it came down to a bold move in the final 200 meters by Marco Canola (Nippo-Vini Fantini) who took the win two seconds ahead of the chasing peloton. 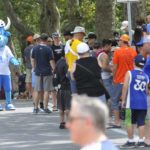 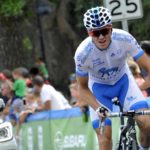 “I’m over the moon that I was able to finish this race as a stagiaire. It was a hard, but I’m happy. I knew I had the power and capability to finish this race but there is a difference between knowing something and actually doing it. I knew it would be tough and it was tough every single day, but I’m here and I did it.”

Team Novo Nordisk returns to racing on Thursday with the four-day Colorado Classic when it kicks off in Colorado Springs.

Solid Progress Is Evident at Tour of Utah