Snowbasin Resort, Utah — Stage 2 of the Larry H. Miller Tour of Utah saw Team Novo Nordisk’s Stephen Clancy tackle the 151-kilometer race in the America First Credit Union’s fan favorite jersey. The general public voted Monday on the jersey, which was based on the rider with the best ideals and professionalism in cycling, community or a charity.

Tuesday’s race started in picturesque Brigham City with its stunning mountains serving as a race backdrop. Several teams were determined to keep the race in control, and despite many attempts, a breakaway didn’t escape for nearly 90 minutes on the sweltering day.

The three-man break earned a maximum gap of 5:10 and began to splinter as it reached the bottom slopes of the North Ogden Divide at five kilometers in length and an average gradient of 10 percent.

The race came together on the descent off the climb and several teams organized at the front. They increased the pace across the flats heading to Snowbasin. Many riders couldn’t hold the pace, and as the race reached the final climb, the front group was down to around 20 riders.

The summit finish climb up to Snowbasin had an average gradient of six percent. Attacks flew from Axeon Hagens Berman, Rally Cycling, Caja Rural and United Healthcare. In the final meters, Eder Frayre (Elevate-KHS Pro Cycling) earned a gap but Brent Bookwalter (BMC Racing Team) sprinted past him to take the win at the line.

“It was a long, hot day and took quite awhile for the break to finally roll. Once it did, the field kept them pretty close, which meant everything stayed fast. On the final climbs, the GC guys started to flex their muscles and the race exploded at that point. Any day when the weather is extreme, it makes life harder.”

Team Novo Nordisk, the world’s first all-diabetes pro cycling team, is currently competing in two races: Tour de Pologne and Tour of Utah. Wednesday’s Stage 5 of the Tour de Pologne is a 130-km race from Olimp Nagawczyna to Rzeszow while Stage 3 of the Tour of Utah is a eight kilometer uphill race against the clock in Big Cottonwood Canyon. 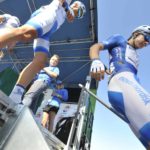 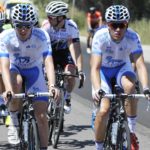