Crash Takes Down Two at Tour of Utah

Bountiful, Utah — Team Novo Nordisk’s Gerd De Keijzer and Fabio Calabria went down in a mid-race pileup on Stage 5 of the Larry H. Miller Tour of Utah. Both riders were able to finish the challenging stage and are expected to start Stage 6.

The 185.4-kilometer course began flat and had a few small climbs in the middle before two crushing laps featuring a Category 3 climb. Similar to Stage 4, the peloton didn’t let the break go for nearly 90 minutes. Team Novo Nordisk made numerous attempts to get into the break, but when a large crash took down De Keijzer and Calabria along with a dozen other riders, 15 riders escaped up the road and formed the day’s main break.

With such a sizeable group, four riders attacked and stayed off the front until the race came through Bountiful for the first time. By the second time over Bountiful Bench, the race splintered and only two dozen riders battled for the win.

“I thought today would be similar to the other days with a standard breakaway that would come back together before those two final, steep climbs. Like all the other days this week, it took a long time for the break to go. What finally allowed it to go was the big crash. That allowed those 15 riders to get up the road and meant the rest of us had to chase back of the next 20 km. I knew I had burned a lot of my matches for the day getting back and over those final climbs.”

Team Novo Nordisk, the world’s first all-diabetes pro cycling team, has two stages remaining at the Tour of Utah. Saturday’s 97.8-km stage serves as the race’s queen stage or hardest stage. The day kicks off in Heber Valley and includes the Alpine Loop, a Category 1 climb that runs beside Sundance Resort, before a summit finish up to Snowbird Resort with nearly 10 km of climbing at 8 to 12 percent. 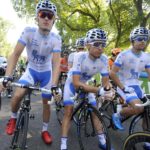 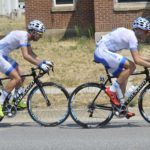