Solid Progress Is Evident at Tour of Utah

Snowbird Resort, Utah — Six Team Novo Nordisk riders completed the Queen Stage at the Larry H. Miller Tour of Utah. In the two times the world’s first all-diabetes pro cycling team has tackled America’s Toughest Stage Race, no more than three riders have started the final day of the race. The remaining riders include three neo-pros and one stagiaire who is making his professional cycling debut at the American race.

The team only lost Gerd De Keijzer on Saturday’s stage after he sustained injuries in Friday’s Stage 5 crash. The Dutchman held on until the final climb to Snowbird before he was pulled from the race.

The 97.8-kilometer race saw a sizeable 18-man breakaway escape early into the short day. Heading up the first categorized climb, four riders bridged up to the break. As the race hit the bottom slopes up to Snowbird, Bardiani-CSF took control of the peloton, drove the pace and splintered the race. On the 10 km climb, a seven-man elite front group emerged that included current race leader Rob Britton (Rally Cycling) and two Bardiani riders.

On the final approach, attacks flew yet it was Giulio Ciccone (Bardiani-CSF)’s move that proved decisive. He took the win by 35 seconds over his teammate Simone Sterbini (Bardiani-CSF). Rob Britton (Rally Cycling) held onto the overall race lead.

“Today lived up to its billing. It was definitely a tough stage with two super challenging climbs. We were sad to lose Gerd on the final climb, but he fought so hard to make it to the end after yesterday’s crash. My legs and hip felt pretty good today, and I’m hoping I’ve recovered from that crash enough to take a go at it tomorrow.”

Sunday serves as the final stage of the Tour of Utah. Stage 7 is an 117.8-km circuit race around downtown Salt Lake City. The 11-lap course features a climb up State Street and should come down to a sprint finish. 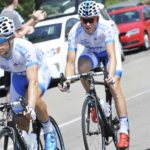 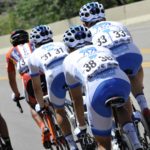