ABU DHABI, UAE — Desert winds split the peloton in Abu Dhabi on Thursday, and Team Novo Nordisk’s David Lozano found himself on the right side of the race when things became chaotic.

On a long, straight road in Khalifa Port in one of the many large islands in the Arabian Gulf, the peloton began to close its gap to a five-rider breakaway that included Charles Planet on his second day at the front of the race. In anticipation of heavy cross winds the riders suddenly started to jockey for position and fight each other for space across the road.

Planet’s group was soon caught, and Lozano, riding with teammates Sam Brand and Rik Van Ijzendoorn, found himself at full speed on narrow roads in a splintered group of chasers, flying after a pack of around 30 riders at the front.

Within 30km the peloton reassembled itself, but did not slow down, and Lozano stayed elbow to elbow until the finish line, arriving in the same time as stage winner Elia Viviani of Italy.

“Today was a little bit of a hectic stage. We knew before the stage that kilometer 95 would be the decisive point of today’s race. I was in the right position with Sam and Rik, and usually when it’s a headwind you hide behind your teammates. But when the wind comes from the sides it’s really hard to hide in between the other riders. We were going 70-75 km per hour in the flat today, which is fast. Wind means pain in a bike race.” 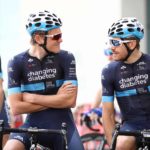