ZHIJIANG, CHINA – After four hilly stages at the Tour of China it was a mass finish on Wednesday in stage five, with sprinters all coming to the front to fly past the line.

Team Novo Nordisk’s Mehdi Benhamouda found himself in a good position coming into the final kilometers, but a massive pile-up in the last corner stopped him, and most of the rest of the peloton from the final 400m.

There were no serious injuries in the crash, and Benhamouda together with the rest of the affected riders were all given the same time as stage winner Marco Benfatto of Italy. The 2018 Tour of China I will be flat for the remaining two stages, but some climbing will return in the Tour of China II next week.

“As expected, today’s stage was super fast. We averaged almost 48km an hour, so the race was over in about 2 and a half hours. We had a bunch sprint at the end, and we hit the front with 3km to go, leading out Mehdi. There was a lefthand turn with 300m remaining and there was a crash right on the corner. So Mehdi was stuck in that and unfortunately he lost his postion in the sprint. But we’re learning and we’re getting our sprint training together and we’ll try again tomorrow.” 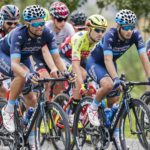 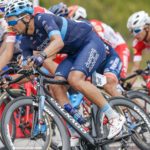