Top 10 For Benhamouda at Tour of China II Finale

ANSHUN, CHN – Mehdi Benhamouda came back after a late crash on Sunday to finish 8th in stage five at the Tour of China II. With help from his teammates to avoid the pile of riders in front him, Benhamouda found his way back to the front on the final day of racing.

Organizers moved the start time up to an early morning departure from Anshun for 127km on a rolling loop south of the city. High speeds marked the first 90 minutes of racing until a small breakaway achieved just a handful of seconds advantage on the peloton.

Expecting a sprint, teams closed down the escapees’ chances and began to maneuver for the final kilometers. A crash at 5k to go took down several riders, including Team Novo Nordisk’s own Declan Irvine. Benhamouda waited as his teammates reorganized and brought him back up to speed, then watched as the French rider worked up to his second Top 10 finish this week. Irvine finished the race with no injuries.

Team Novo Nordisk now concludes the first of three China trips this Fall, and says goodbye to the Tour of China I and Tour of China II for 2018. The world’s first all-diabetes pro cycling team will next race October 3 in Germany at Sparkassen Munsterland Giro.

“The stage finished with a bunch sprint, and the speed was high all day. We averaged nearly 50km an hour.

It took about an hour and a half for a small break to go up the front, but they never really got any big time. It came all back together in the sprint, and with 5km to go there was a big crash. Declan came down unfortunatley. Our lead-out train got a bit messed up, but we got Mehdi back up to the front, and he managed to weave his way through all the carnage to pick up a top 10.

That’s a wrap for Tour of China II. We finished a massive lap of China, with a lot of transfers and a lot of fast racing, and we’ll be back next year.” 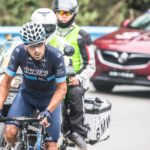 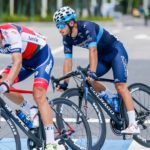