Tour of China I Concludes With Sprint Finish

LANGSHAN, CHN – The first half of a two-week, two-race event in China finished on Saturday for Team Novo Nordisk, as the world’s only all-diabetes professional cycling team held on for a fast finish to the Tour of China I.

Mehdi Benhamouda found himself behind a long line of teammates coming into the final kilometers, and rose to the final kilometers of competition together with a great wall of riders all sprinting for the win. The French rider finished in the same time as stage winner Manuel Penalver of Spain.

After seven stages the peloton will rest on Sunday and then start the Tour of China II on Monday with a short individual time trial in Xinning Langshan, a mountainous district full of rivers, wind-carved stone gorges and tourist infrastructure built to attract domestic and foreign visitors.

The Tour of China II will include the opening prologue and five mostly flat stages over the next week, plus a rest day on Friday, September 21 to accommodate a massive 1150km transfer by bus.

“It ended up in a sprint like we expected. We went out a circuit for the first 40km, and we worked for Mehdi at the end. We’re pretty happy with the week here. We were fine-tuning the sprint train, piecing it together day by day. Today was definitely the most successful when we put it together. So we’re excited for Tour of China II to see if we can try and improve on what we developed here.” 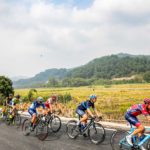 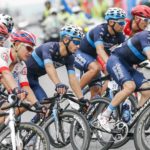