ANSHUN, CHN – Team Novo Nordisk tackled a tough time trial on Saturday, snapping back onto their Colnagos as racing resumed in the Tour of China II.

With a day off on Friday to manage a train transfer of more than 1000km, Saturday started with heavy rain near Anshun, a city known for its aerospace industry and proximity to China’s tallest waterfall. The rain eventually settled down, but the race remained highly competitive. Riders emerged one by on on the 21km looping course through scenic hills and along a small river, with stage winner Artem Ovechkin of Russia finishing in just under 30 minutes.

With Saturday’s stage complete, riders from the world’s first all-diabetes pro cycling team will head back to their hotel and rest up for Sunday’s final stage at the Tour of China II, a 127km loop that heads south of Anshun city into hilly country, with a sharp fourth category climb to come after the first of hour of racing.

“It was a hard day. The rain in morning eased off, and it wasn’t so hard during the race, the roads were drying up. But it was a demanding course. There was a lot of wind out there and quite a bit of climbing for an individual time trial. Even thought it was only 21km, on the road bikes it was still a 30-minute effort. Now we’re keen to rest up the legs ahead of tomorrow’s final stage.” 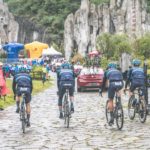 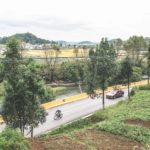