CRIKVENICA, CROATIA — Andrea Peron felt unlucky on Friday when most of the peloton stopped in front of him with 700m to go in stage four at the Tour of Croatia. The Italian had relied on his teammates to keep him in front for the final sprint, but nothing could compete with bad luck.

A breakaway that formed after more than an hour of racing built a five minute advantage over the bunch, but on a coastal road headed straight north, with no turns, the peloton covered most of the gap by the time the race entered the final circuit in Crikvenica.

Peron edged to the front to anticipate the three tight turns in the final kilometer, but riders ahead of him overestimated their own speed in the corners, and when more than a few went down on a left-hander across the small river that drains into the tourist port town, it was the end of Peron’s sprint chances before they ever had a chance.

Charles Planet left the race before the start to begin his recovery following an injury to his right leg from the day before. On stage three the French rider bruised his knee, and he woke up Friday with stiffness and road rash. Team medical staff cared for Planet and the rider is expected to be racing again soon.

“Today was a possible day for sprinters, but the breakaway took almost 50km to go because everybody wanted to be in it. There was one little mountain at the finish and the group split, but it was ok for me because I was in the front. The team had me perfect until 700m to go, but then the guys at the front of the group crashed and all I could do was watch the race go away.” 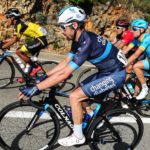 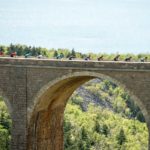