Hot Start at Tour of Hainan

DANZHOU, CHN – Team Novo Nordisk opened its final race of the 2018 season in China on Tuesday, starting the 13th Tour of Hainan with a 90km circuit race on a sweltering day in the middle of the tropical resort island of Hainan.

Italian Jakub Mareczko won the bunch sprint at the end of two hours of racing, with the entire peloton coming into the final kilometer together. A crash with 800m to go held up about half of the pack, including riders from the world’s first all-diabetes pro cycling team, but no TNN riders were injured.

The Tour of Hainan is a 9-day stage race with five days of flat finishes and four days in the mountains. Hainan is off the southern coast of mainland China, and enjoys a warm, tropical climate year round. Heat and humidity are expected for Wednesday’s second stage, a 139km flat race north from Danzhou to the coastal city of Chengmai.

“Today was a 90km circuit race with 4 laps of 22.5kms. The breakaway went on the first lap and they got about a minute’s gap, blow out to about about 1:30 maximum. And then on the last lap all of the teams got on the front and brought it back really quickly. There was a tricky left-hand corner with 1km to go, and there was a big get-off in the last 800m. I got caught up it that, and I think half the peloton did, so there’s a lot people getting the same time.

Tomorrow’s stage 2 is 139km. It’ll be reasonably flat and will probably end up in a bunch sprint like today. But we’re going forward, we’ve got eight stages to go. And hopefully we can piece something together and come out with a good result.” 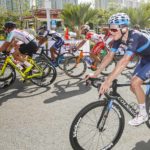 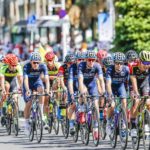