QIONGHAI, CHN – Team Novo Nordisk’s Sam Brand put himself in the breakaway on Thursday’s stage 3 of Tour of Hainan, spending 200km at the front of the race, showing the Changing Diabetes jersey.

With five other riders, Brand pushed out to a maximum advantage of nearly seven minutes under blazing tropical skies, collecting valuable bonus seconds along the way in the intermediate sprints. The 239km, mostly flat stage from Chengmai to Qionghai came together with around 20km to go, and finished in a mass sprint won by Italian Manuel Belletti. Brand and all of his Team Novo Nordisk squadmates finished in the same time as the stage winner.

After three stages at the 2018 Tour of Hainan, the world’s first all-diabetes pro cycling team is in full swing to fight for the front every day of the nine-stage bike race. Brand is completing his first full season with the American-registered squad after turning pro in 2017.

The Tour of Hainan continues on Friday with a shorter 142km stage from Qionghai to Wanning, racing down the coast of the South China Sea on its way around the tropical island off the coast of mainland China.

“Today was a pretty sweaty, hot stage. It was 231km, but we had a bit of success and got Sam in the breakaway.

The break got pulled back together a little bit as it was breaking up. And in the end it came down to a bunch kick, flat, fast stage. But almost six hours on the bike today. And now it’s time to recover for tomorrow’s stage 4. Tomorrow won’t be too bad– 140km and relatively flat, with no big KOMs until later in the race. We’re going to focus on recovery now and fingers crossed for tomorrow.” 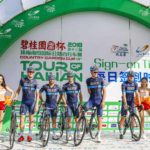 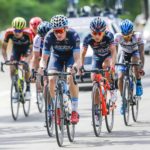