Mountains Prevail at Tour of Hainan

WUZHISHAN, CHN – The world’s first all-diabetes pro cycling team took on the hardest stage of the 2018 Tour of Hainan on Sunday, a 193.2-km leg into the tropical mountains of Hainan Island that lasted five hours.

Sam Brand finished at the front of the bike race for TNN, with help from teammates throughout the day to fetch bottles and cover him in the wind. At the end of October and in the final race of the season, the squad put in extra effort despite the heat and humidity.

Gino Mader of Switzerland won the stage, Brand was within two minutes and found great benefit from the tireless assistance his teammates rendered.

With three stages remaining in the Tour of Hainan and the curtain soon to come down on the 2018 season, the riders in China will face a short, flat and fast stage back down to the coast on Monday, with one more mountain-top finish on Tuesday, and an expected sprint stage on Wednesday.

“The first few KOMs were controlled, and it wasn’t too hard. Then on the last KOM, with the summit only 9km away from the finish, it got lit up and strung out, and it pretty much blew the bunch to pieces. After that it was just, find a group at your own speed and just get to the finish line, basically. I found a group and made myself go inside-out and just made it to the finish line safe and sound, ready to fight another day.

It’s pretty hard doing this length of racing in October. It’s being a really long season, starting in February and racing all year. I’ve done about 80 race days so far, so it’s definitely been a long season, and I’m looking forward to some time off after this race. But I’m looking forward to a shorter day tomorrow. Only being 127km, it’s definitely going to be a welcome surprise.” 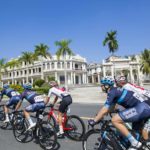