Speedy Descent into Sanya at Tour of Hainan

SANYA, CHN – Team Novo Nordisk came down from the tropical jungle mountains in the interior of the Chinese island on Monday, sprinting into the beachfront tourist capital of Sanya on a short stage seven at the Tour of Hainan.

With three days of mountains behind them, and some stages lasting longer than five hours, Monday’s stage seven was a brisk 127km that clocked in at 2:52. with the entire peloton finishing in a mass sprint. Italian Marco Benfatto won the stage as the peloton turned its thoughts to Tuesday’s final climb at the end of stage eight.

The world’s first all-diabetes pro cycling team worked throughout the stage to keep itself together and well-rested for the remaining two stages at the Tour of Hainan. Sam Brand rides highest in the General Classification for Team Novo Nordisk, and will likely look to his teammates for assistance one last time in a stage that races flat for 186km before turning steeply uphill in the final five.

“Today was 127-km stage, so fairly short. The first hour was full of attacks and we covered most of the moves, but eventually the bunch only let three guys go. After that, it was fairly controlled. With the fast finish in Sanya, we tried to keep Decaln and Fabio protected for the sprint.

Tomorrow is a long stage, almost 200km with a summit finish, so it will be a really decisive day for the G.C, so we’ll really try to help Sam do well on the last climb.” 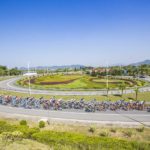 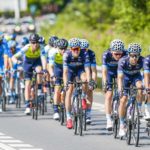