Brand Battles Back From Crash at Tour of Hainan

CHANGJIANG, CHN – The penultimate stage at the 2018 Tour of Hainan was flat for the first 190km, and buffeted by crosswinds, dealing out a harsh day for the peloton before its final 7km HC climb to the summit finish.

Team Novo Nordisk set about protecting its highest placed rider in the General Classification, Sam Brand of the Isle of Man. To keep the first-year pro covered from the wind that came at his side, as well as from the front so that when it came time to uphill, Sam was ready.

The plan worked, and Brand, in spite of lingering abrasions from a crash on Monday, rode to the maximum effort as the race turned itself skyward. In a stage won by Italian rider Fausto Masnada, Brand used his teammates assistance to climb ahead of struggling competitors and raise his position in the General Classification with one stage remaining.

On Wednesday the world’s first all-diabetes pro cycling team will conclude its 2018 Tour of Hainan with a 181km finishing stage into Danzhou, in what is widely expected to be a mass sprint after a flat day.

“The mountaintop finish lived up to its reputation. It was a long, hot, hard stage. And actually the wind played a bigger factor than we anticipated, with crosswinds throughout most of the day. It kept the bunch on edge and nervous most of the time. But a 5-man move got up the road with a gap of up to 10:00 at one point. However, it came back together for the final climb.

We looked after Sam for most of the day, kept him fed and watered, and placed him in the best possible position that we could heading into the bottom of the final climb. He went full gas, max effort to the top, fighting for results and hopefully the G.C. is still in the cards for him. 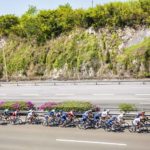 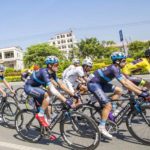 Speedy Descent into Sanya at Tour of Hainan

Mountains Prevail at Tour of Hainan

Brand Holds on in Split Peloton at Tour of Hainan

Clancy Takes His Turn in the Tour of Hainan Breakaway