DANZHOU, CHN – Racing ended on a high note for the world’s first all-diabetes pro cycling team on Wednesday, with five riders closing out the 2018 calendar on a hot day at the Tour of Hainan.

Stagiaire Declan Irvine notched his highest-ranked finish of the pro season in a mass sprint, with his pack of riders finishing all together after 182km of racing. The young Australian has moved up from a successful few years racing on Team Novo Nordisk’s development squad, building skills and learning his way to compete shoulder to shoulder in a merciless peloton at the highest level of the sport.

Fabio Calabria slid out on a left turn in the closing kilometers of the stage, with no injury, keeping teammate Sam Brand upright when the pack encountered a gravel-strewn turn. Joonas Hentala and Stephen Clancy spent the better part of the first hour trying their luck in various breakaways, then resumed their support of Brand in the closing kilometers.

Brand held the top position in General Classification for Team Novo Nordisk at the Tour of Hainan, a remarkable distinction in a season that began back in February and saw the rider travel all around Europe, to Australia, to Japan twice and finally to finish with a marathon stretch of Asian racing that began at the beginning of October.

The 2018 season is now closed. Team Novo Nordisk riders and staff can rest and recover through November before resuming training and preparations for a busy and exciting return to competition in 2019.

“Today was the last stage of Tour of Hainan. It’s also the last race for Team Novo Nordisk in 2018. It was crazy, it was fast, it was ferocious, it was hot- so exactly what we expected. Joonas, Stephen, Fabio and Declan were all active at the start, protecting me throughout.

A really good job this week from the guys, I couldn’t have asked for anything more. Joonas was looking to get in the break today. That obviously didn’t come off for us, but the worked hard to protect me once the breakaway had gone to hold my position in G.C. They did a good job, they gave everything, and we finished well.

The guys are phenomenal. I’ve learned so much. I’ve race this year in the Australia Commonwealth Games, at Milan-San Remo, World Tour at RideLondon. It’s been phenomenal. It’s been such an adventure: we raced in Denmark, Hungary, in Asia for Tour of China and Japan Cup. So I’ve got to travel the world and race with some of the greatest people.

The amount of support you get from our team is fantastic and these guys have given me everything to learn and it’s been a pleasure to ride with every single one of them.” 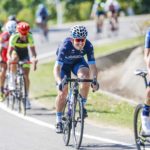 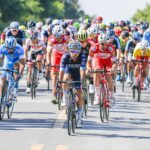 Brand Battles Back From Crash at Tour of Hainan