WUJIANG, CHN – Strong winds picked up for the peloton in China on Saturday, pushing the Tour of Taihu to a sprint finish at the end of stage six.

The world’s first all-diabetes pro cycling team managed the 116km stage from the main bunch, as rivals for the overall classification drove the pace. A few breakaways managed to get out in front, but no group of escapees ever managed more than a minute advantage.

In the end Jordan Parra of Colombia was fastest across the line, with the rest of the peloton, including all riders from TNN together in the same time.

Sunday’s stage seven will be the last day for riders in the 2018 Tour of Taihu Lake to make their mark on the race, and the 137km route from Wuxing to Changxing could be the most decisive leg of the bike race.

Team Novo Nordisk will finish its second of three Fall Asian stage races on Sunday, then race next week in the one-day Japan Cup in Utsonomiya before finishing the season back in China at the Tour of Hainan.

“It was a really windy one today. It was really nervous, and it was really important to stay at the front. But actually today there was more control from the leading teams.

There was only two guys up the front, with a maximum of 1:00 gap, so we knew it would be a bunch sprint today again. We stayed together most of the race, with some pretty good teamwork. At the end, even if I’m not a pure sprinter, I took my chance to stay near the front and try to get something for the team.

It was super hard with many crashes, so I’m already really happy to avoid all of the crashes the whole. And I will try again at today’s final stage.” 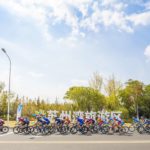