CHANGXING, CHN – The 2018 Tour of Taihu Lake finished on Sunday, with the peloton racing three hours through densely populated and picturesque cities of China before a hotly contested sprint at the end of the day.

With all riders classified in the same time as stage winner Jakub Mareczko of Italy, Team Novo Nordisk completed its second of three fall stage races in Asia with great success, and packs up to race next weekend in Utsonomiya at the Japan Cup.

Charles Planet was the world’s first all-diabetes team’s top finisher at the Tour of Taihu Lake, separated from the podium by just 51 seconds over seven stages and more than 800km. The race began with a short prologue in Wuxi, and spent the week circling Lake Taihu, a major population center surrounded by multiple large cities, parks and recreation centers just west of Shanghai.

“Today was again a really flat stage, and and the sprinter’s team and the leader jersey’s team controlled the race really well. They didn’t give any chances for a strong breakaway to go. I think we did our best to get Charles in a good position with 5km to go. And then we had good confidence to fight with the other teams. We are getting closer and enjoying it.

We showed that even though we started with just four guys we did our best to stay together always in the front, protecting Charles. I think we raced a good race. It was flat, so it didn’t suit as of an up-and-down course for me and Charles, especially. We had our stagiaire, Oliver, with us, who did a really good job. He was with us all day. So I think the young guys that are coming up are really strong and really motivated. ” 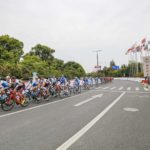 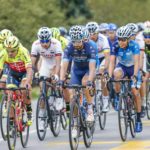