JINHU, CHN – Stage three at the Tour of Taihu Lake was a short, sharp point-to-point race across irrigated fields and historic Chinese tourist attractions, and finished in a mass sprint after a flat day chasing the breakaway. Charles Planet was the top finisher for Team Novo Nordisk on the day, crossing the line in the same time as stage winner Jakub Mareczko of Italy. The entire peloton finished the 88km race in under two hours, with an average speed of 46km per hour. The world’s first all-diabetes pro cycling team is now midway through their second of three autumn stage races in Asia, and the Tour of Taihu Lake will continue through Sunday with a finish in Changxing after seven stages around the fertile fields west of Shanghai. Thursday’s stage four promises another flat and fast day for the peloton, with 98km in Jiangyan.

“Today, the wind played a little bit of a game during the race, and it was fast and really nervous. I felt ok, but it was really hard to fight to stay in good position. And I’m a little angry that I couldn’t help Charles as much I wanted. 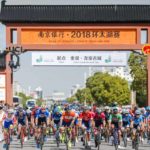 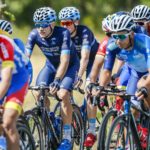