Katowice, Poland — Team Novo Nordisk’s Charles Planet extended his lead in the King of the Mountains jersey, took the lead in the Blue Jersey for most active rider classification and climbed to second in the overall classification of Tour de Pologne after producing a stellar effort in the breakaway for the second day in a row on Stage two of the seven-day World Tour race.

As he took the start line in Tarnowskie Góry the 25-year-old Frenchman had his mind set on defending his pink KOM jersey and was quickly on the attack as the flag dropped. Once again Planet enjoyed the company of a rider from the Polish national team, this time it was Paweł Franczak who flew the flag for the home nation at the front of the race.

With two categorized climbs and three intermediate sprints on the menu the goal was primarily to extend his leadership in the pink jersey but the possibility to challenge for a second jersey was not lost on Planet who showed his grit and determination by contesting for both.

The duo quickly carved out and advantage of three minutes to the peloton and worked well together until the first intermediate sprint who went to Franczak with Planet wisely managing his strength and settling for second.

The gap started to come down ever so slightly but the two escapees successfully stayed away until the final circuit in Katowice. Despite the previous day’s effort Planet took both the KOM’s on offer and also scored maximum points in the second intermediate sprint to propel himself to the top of the leaderboard in the Blue Jersey competition. As the race entered the first of three laps in the final 19km circuit in Katowice the sprinter’s teams quickly went into action and Planet and his breakaway companion were eventually reeled in with less than 15 km to go.

Ultimately Luka Mezgec (Mitchelton – Scott) sealed the stage victory after a hectic bunch sprint finale which saw Fernando Gaviria (UAE Team Emirates) taking second place and the yellow jersey and stage one winner Pascal Ackermann (BORA -hansgrohe) having to settled for third. Planet did very well to finish in the main group and narrowly missed out on taking the ownership of the yellow jersey. Our breakaway specialist now sits in second in the general classification, just one second shy of Ackermann who, had he not finished in the podium, would have relinquished the lead of the race to Planet.

Overall a dazzling day for Charles Planet and Team Novo Nordisk who lead two classifications in Tour de Pologne: the pink jersey for the King of the Mountains leader and the blue jersey for Most Active rider after another day showing what’s possible with diabetes at the front of the race.

The Tour de Pologne is due to continue tomorrow with the final flat stage in the 76th edition of the race, a 155.5km affair from Silesian Stadium in Chorzów to Zabrze, before the first mountain stage on Tuesday (August 6th).

“It was a super nice effort in the breakaway, I recovered really well last night and had super legs. For today I had one main goal and that was to to keep my KOM (King of the Mountains) jersey but at the same time I had another goal in my mind it was to get this blue jersey, the intermediate sprint jersey which at the end means the most combative jersey.

It’s just incredible to have two jerseys in a World Tour race. Yesterday it was already really nice day for the team to have the KOM jersey but now to get a second one. I have no words. I’m just really proud for me, for my team and for all the people affected by diabetes.” 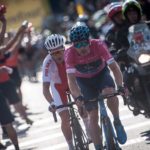 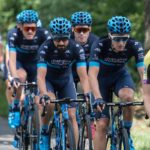 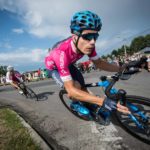