Zakopane, Poland — Charles Planet extended his lead in the “Most Active Rider” classification after yet another stellar breakaway performance on stage 5 of Tour de Pologne.

For the fourth time in five days, and despite injuries sustained in a crash on stage 3, Frenchman Charles Planet showed his fighting spirit by going all in for the breakaway. After a flurry of attacks, Szymon Rekita (Polish National Team) and Kamil Gradek (CCC Pro Team) opened a gap of over 30 seconds to the peloton. At this point Planet jumped from the main field and successfully bridged across to the front solo.

The trio was later joined by Jelle Wallays (Lotto Soudal) and the day’s breakaway was formed. Knowing that he would inevitably relinquish the King of the Mountains jersey over the coming climbing stages and still recovering from injuries sustained in a crash on stage 3, the 25-year-old Frenchman made the tactical decision not to contest the KOM’s on offer and focus his energy on the intermediate sprints with the aim to extend his lead in the blue jersey competition.

The quartet worked hard to open up a four-minute lead but the peloton wasn’t keen on letting the advantage expand further and brought it down to under two minutes with 100 km to go.

After the two Cat-2 climbs, Planet successfully took the first intermediate sprint before a sudden increase of tempo in the bunch sentenced the faith of the escapees, who were shortly after swallowed by the peloton on final Cat 1 climb, approximately 40 km from the finish line.

As the race was approaching the finishing circuit in Bielsko—Biała, new attacks were launched off the front of the field but ultimately brought back before the final gallop which saw Luka Mezgec (Mitchelton- SCOTT) outspent the competition and take the second stage win n the 76th edition of Tour de Pologne.

The world’s first all-diabetes pro-cycling team will take on the first of the two decisive climbing stages of Tour de Pologne this Thursday, a 160km affair starting in Zakopane and finishing in Kościelisko, with no less than seven Cat-1 climbs on the menu.

“My plan was to be once again in the breakaway, since there were two intermediate sprints for the blue jersey, and my goal is to fight for this jersey till the end of the race.

Today, there was a great fight for the breakaway and I wasn’t sure if I would make it. Two guys went away and I decided to jump, even though there was a big gap already.

I have a big opportunity to take a jersey, and suffering is for a short time but regret lasts forever. So I attacked and bridged across.

I then had to make a decision: fight for the blue jersey over the King of the Mountain. So I focused on fighting for the the Most Active Rider jersey, instead of going for two jerseys and risk losing everything. So I’m really happy I could take one of the sprints and increase my lead in this classification” 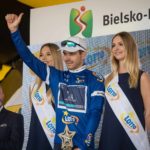 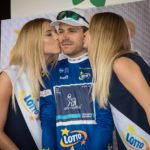 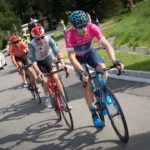