Kigali, Rwanda — David Lozano left everything on the road and claimed another top 10 for Team Novo Nordisk in Tour du Rwanda cementing his sixth place in the overall classification with only one stage to go in the recently upgraded 2.1 UCI race.

At the start of the short but gruelling Stage 7 in Nyamata Lozano had his eyes set on repeating the victory he achieved in the penultimate day on previous edition of the race. The tactic was to race offensively and our Spanish rider did just that by making the day’s breakaway of 15 riders.

With team-mate Ulugbek Saidov supporting him at the front Lozano rode strongly all day but an untimely puncture at a crucial stage – with all but 30km to go – meant he had to chase back to the dwindling front group and make up a deficit of more and one and a half minutes solo.

The effort took its toll on the 30-year-old rider but he fought on to cross the finishing line in an honourable eight place, a result that does little justice to his performance on the explosive parcours, which included 6 categorised climbs, four of which with rain drenched cobbled sectors.

The stage was won by Yacob Debesay (Eritrea) while Merhawi Kudus (Team Astana) crashed and saw his advantage in the lead of the overall classification shrink to just seven seconds over Rein Taaramae (Direct Energie), his most direct opponent.

Lozano gained some time on most of his rivals but maintains his sixth place in the GC while teammate Joonas Henttala also had a solid day in the saddle and keeps his Top-20 position.

Tour du Rwanda 2019 concludes this Sunday with the 61.7 kilometres stage in Kigali which includes seven Cat-1 climbs. The peloton will tackle the infamous Mur de Kigali – a cobbled 400 metres climb of 14.5% average gradient – three times and with the GC fight wide open a fast-pace and attacking race is expected to unfold.

“Today we played to win. We placed two guys in the break, Ulugbek (Saidov) and myself. He did all his best to protect me and save my legs for the final. He did an amazing job and I’m so glad he was there with me. Afterwards it was up to me, I did my best to stay at the front and in the long pavé climb I attacked and I bridged to the two leaders who were at the front. Then I had the bad luck to suffer a puncture in the front wheel. At that moment I didn’t have the team car with me so I lost one and a half minutes to the guys in front. Eventually I changed the wheel and came back to them, which shows I had good legs, but at the end I was just a little bit tired. Still I think we have to be happy because we did really great team work. Tomorrow is the last stage and we will try again!” 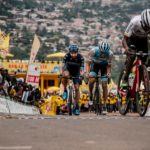