Henttala Lights Up Tour of California Stage 4 in Breakaway

Not even a gloomy, rainy start in the Laguna Seca Raceway dampened the spirit of Team Novo Nordisk who was determined to animate the 214.5 km stage to Morro Bay. Our experienced Finn Joonas Henttala succeeded in forging his way into the day’s early breakaway alongside Roy Goldstein (Israel Cycling Academy), Michael Hernandez (US Cycling), Jonny Brown and Ian Garrison (Hagens Berman Axeon).

The peloton kept the quintet on a short leash and kept the gap south of five minutes all day as they weaved their way south along the striking Highway 1, one of the most scenic stretches of coastline in the country,  that transverses the dramatic Big Sur.

As the breakaway entered the last 70 km the gap was still north of three and a half minutes but in the peloton the sprinters teams’ started to invest some firepower into the chase and the advantage was gradually shaved down to one minute at the 30 km to go mark. Soon after Joonas Henttala put in a strong attack off the front and only Hernandez could follow. The American cyclist counterattacked later and was the last escapee caught just inside the last 10 km.

Team Novo Nordisk’s riders escaped unscathed the mayhem in the closing stages and in the finale it was up to Andrea Peron to sprint for a result in Morro Bay. Despite having crashed the day before our fast Italian put in a determined effort and came home in a respectable 31st position, with the same time as the stage winner Fabio Jakobsen (Deceuninck – Quick Step),

Henttala capitalized on his strong form and made the most of his time in the break by winning both intermediate sprints up for grabs in a day that included more than 3000 meters of climbing.

The world’s first all-diabetes team will continue their US campaign in the biggest cycling race in the country this Thursday as they’ll take on Stage 5 that will see the peloton covering  219.5 km between Pismo Beach and Ventura.

“I always had this stage in my mind. The break has made it before in this stage so I really wanted to give it a try. Unfortunately when we hit the coast we had block headwind which made it really hard with only four other guys. We tried to ride steady and keep the gap around three minutes to the bunch. I knew the peloton would catch us no matter what because they wanted the sprint stage. I tried to attack in one climb. I succeeded in splitting the group and really felt I was the strongest in the break but this american riders saved his legs all day with this Courageous Riders jersey in mind. He made the last attack and he got the jersey. Good day for the team and I’ll try again.” 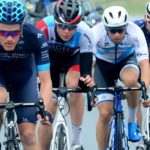 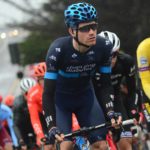