Chengde City — Tour of China kicked off this Saturday with a short and explosive 96 km stage in the Hebei Province which concluded in a bunch sprint where Team Novo Nordisk’s Mehdi Benhamouda finished just outside the top 20.

With just two cat-4 climbs and a fast run in to the line the opening day of Tour of China had all the makings of a classic sprint stage and Team Novo Nordisk were up to the challenge and looking for a top result with young Frenchman Benhamouda.

A flurry of attacks went off the front in the first of the two laps of the circuit around the scenic Yudaokou forest area but no clear-cut breakaway was formed. In the end, the predicted bunch sprint resulted in Marco Benfatto (Androni Giocattoli – Sidermec) taking the stage honors. Benhamouda was in the mix but was unable to go better than 21st place on the day.

Team Novo Nordisk will continue to race in China this Sunday, with an 7 km individual time-trial in Chengde Yongqian.

“It was a pretty hectic fast stage and we complete it in around two hours. Lot’s of riders wanted to get in the breakaway today with the King of the Mountains jersey up for grabs as well as the Yellow Jersey. We were active and we tried really hard. Several moves went off the front but they never got any serious advantage. In the end it came down to a bunch kick. We had Mehdi (Benhamouda) as our sprinter and in the hectic finish he finished just outside the top 20.” 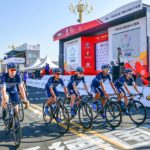 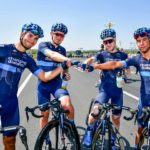