Benhamouda Sprints 2nd on Stage 5 of Tour of China

Atlanta, Georgia — Team Novo Nordisk came within inches of securing the first win of the season this Wednesday when Frenchman Mehdi Benhamouda sprinted to second place in Stage 5 of Tour of China, his best result as a professional cyclist.

With only 116 km on the menu of a mostly flat course within the city of Hunan the peloton rode at a high pace all day making it virtually impossible for a breakaway to stick. However, after a hectic first 35 km of multiple attacks, a small group got away, amongst them our Argentinian Emanuel Mini. The escapees opened a maximum gap of just under a minute but were caught after 15 km as the attacks from the bunch kept coming thick and fast.

Team Novo Nordisk had set their eyes on the expected bunch sprint finale and worked tirelessly to keep Mehdi Benhamouda in optimal position leading up to the final kick.

The 24-year-old, who had already shown to be on great form taking a top 5 result on stage 3, did a brilliant sprint and finished runner up to Marco Benfatto (Androni Giocattoli – Sidermec) taking an impressive second place on the line. It was the first podium result for Benhamouda and the second for Team Novo Nordisk this season.

This Saturday, after the second transfer day, the world’s first all-diabetes pro cycling team will take on Stage 6 of Tour of China I, 132 km between Yongshou and Ningyuan.

“Today was an amazing day! We rode fantastic as a team from the start and had Ema (Emanuel Mini) in the break. In the end the team did a great readout to put me in perfect position in the last meters. Oli (Oliver Behringer) and Steven (Clancy) worked until 2 km to go and I also had Declan (Irvine) on my wheel to protect me. In the end I just sprinted full gas and took second place. It is my first professional podium and I’m so happy for myself and for the team. We will continue to push hard to get more results in this Tour of China.” 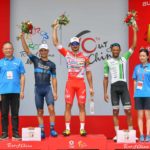 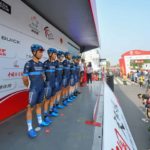