Anshun, China — Stephen Clancy flew the flag for Team Novo Nordisk on stage 2 of Tour of China II with a solid breakaway effort that was brought back just 200m from the finish line.

The 27-year-old Irishman did well to jump clear with three other riders after the first intermediate sprint of the day. The escapees worked well together and opened a gap of up to two and a half minutes. Despite the challenging weather conditions the breakaway managed to stay up front most of the day and went into the final 10 km with over a minute’s advantage.

However, the peloton, led by the sprinters teams, upped the pace significantly in the final stages and absorbed Stephen Clancy and his breakaway companions with just 200 meters to go.

Mehdi Benhamouda still recovering from a high-speed crash suffered on stage 1 was unable to fully commit to the final sprint and had to settle for 16th place on the day.

Marco Benfatto (Androni Giocattoli) won the bunch gallop and Youcef Reguigui (Terengganu Cycling Team) took third place on the line, enough to climb to the lead in the overall classification.

Tour of China II continues this Thursday with an 104.7 km stage that will be held in mountainous terrain and finish in the Cat – 1 climb of Mengding Mountain.

“I got away with three other riders after the first intermediate sprint and we worked really well together all day. We thought we had it in the bag when we entered the final 10km with still a minute to spare on the peloton. It was heartbreaking to be caught 200m before the finish line after being in the breakaway all day. I thought we would be able to hang on and pull off a big result but it wasn’t to be. I gave it my all though and have to be pleased with that.” 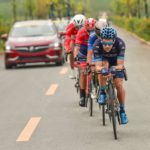 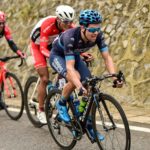