Hlohovec, Slovakia —Charles Planet powered to an impressive eight place amongst some fierce competition on stage 3 of Tour of Slovakia, notching Team Novo Nordisk’s second top 10 result in the race.

With just over 200 km and three Cat -2 climbs stage three presented itself as a long and gruelling day in the saddle. The low temperatures and biting wind posed an added challenge but the fight to be in the breakaway started as soon as the flag dropped. Team Novo Nordisk rode offensively and actively pursued the initial moves. After 30 km of a steady stream of attacks four riders surged ahead and opened a gap of around two and a half minutes.

Gašper Katrašnik (Adria Mobil), Mateusz Grabis (Vostaer), Martin Urianstad (Uno-X) and Kenny Molly (Wallonie-Bruxelles) stayed up front during most of the day but were predictably reeled back in with 20 km to go.

As the world tour teams took the reigns of the race the main field exploded into several groups. Charles Planet did very well to stay on the right side of the splits and found himself upfront in a select group.

On the final categorised climb just before the finish the 25-year-old Frenchman showed his strength and overtook several riders to cross the finishing line in eight place, just five seconds shy of the day’s victor Arnaud Démare (Groupama – FDJ).

It’s the second top 10 result for Team Novo Nordisk in this edition of Tour of Slovakia and the fourth top 10 for Planet this season. With this result Planet climbs to 17th position in the overall classification.

Tour of Slovakia concludes this Saturday with Stage 4 that starts in Hlohovec and finishes in Senica over 142.1km

“Today was 200km stage and up and down all day. The finish was 800m uphill at 8% gradient. The goal was to put someone in the break if the break was 6-7 riders. The entire team worked hard to be in it but eventually a small break of 4 riders went away after 25km of racing. Then we turned our focus to the finish with Andrea and myself. The team did once again an amazing job to protect me and feeding me all day long. With 30km to go Quick Step and Bora attacked and created echelons in strong crosswinds. I felt super strong and found myself in the first group of around 40 riders. The pace was crazy and I just tried to survive! In the final kilometer despite a lot of fight to be in the best position possible I was too far back around 30th position but I went totally all out and came home with 8th place which is an amazing result among this top field, with many riders ready for world championship next week. I’m the only rider coming from a pro continental team in the top 10, all the others are world tour. I’m proud of my performance and I’m sure that with 50 meters more a podium spot was within my hands.” 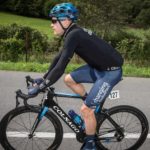 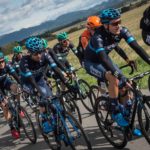 Queen stage shreds the field at Tour of Slovakia