Hufuzen, China— Team Novo Nordisk had to settle for a 12th placing on Stage 2 of Tour of Taihu Lake after a crash in the closing meters sabotaged Andrea Peron’s chances of fighting for a good result on the line.

Not unlike Stage 1 the day served up a mostly flat parcours that included two intermediate sprints. After a number of attacks three riders eventually broke clear and opened a gap on the peloton.

Hayato Yoshida (Nippo Vini Fantini), Afiq Huznie Othman (Terengganu Cycling Team) and Akmal Hakim Zakaria (Team Sapura Cycling) went up the road but were never allowed an advantage of more than one and a half minute. Team Novo Nordisk focused on riding safely in the bunch, anticipating the final bunch sprint where they had Andrea Peron as the key man to fight for a top result.

The lead trio eventually got caught and the sprinters teams went to the front, laying the groundwork for their fast men. Peron was in the mix and well positioned for the final gallop to the line but a moment of hesitation and later a crash that took down a Nippo Vini Fantini rider cost the 30-year-old Italian precious ground and took him out of contention for the top spots.

In the end, after the hectic sprint, Peron had to settle for a 12 place on the finishing line while countryman Matteo Pelucchi (Androni Giocattoli) took the win.

This Saturday the world’s first all-diabetes professional cycling team will face another fast day in the saddle on Stage 3, a 117 km affair in Huzhou where the sprinters are once again expected to take the spoils.

“Today we had a small breakaway of three riders but the peloton kept them under control at all times. They never got a big gap and finally the stage was decided in another bunch sprint. My teammates put me in great position but unfortunately I hesitated a little too long and found myself boxed in. I couldn’t even launch my sprint properly and to make things worse a crash happened in front of me with about 50m to go. I didn’t go down but I could no longer sprint. It was very disappointing but I feel I have to legs to get a much better result here in China.” 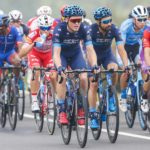 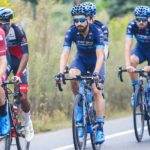